Another amazing Superfestival under the belt – great fun was had by all. There are few pieces remaining that are now up in the FIG-X.net shop. PaulKaiju’s Glitter Bomb Unchiman – the FINAL STAND in resplendent Blue Glitter vinyl with Gold Metal Swipe and Finger Fives to match. Awesome Toy’s Loch Ness Monster gets the S.T.E.A.M. treatment. There is one last full set of the S.T.E.A.M.Y. Fingers available and some singles as well if thats your thing. And if you’re a Phase Pheyden Phan – there are still a trio of Jingle Bomb versions of him available! (green glitter version picture is coming soon)

Thanks as always for your support! In terms of releases – this past year was dominated by the Glitter War releases. Apparently glitter was something I had to get out of my system (all the cool kids were doing it). Maruyama Toys was the enabler – we ran through almost their entire “Crazy Lamé” pull pour catalog.  Red, Silver, Gold, Pink, Emerald and now finally Blue with a special shout out to the amazing color-shifting Aurora.

In addition to our signature figure line – the Finger Five – Paul Kaiju’s Unchiman and The Tarantula’s Nibbler also got the Glitter treatment. (Big thanks to both those artists for being Warriors in the cause) Initially many of the releases were unpainted or had minimal paint app, but in the fall we started exploring metallic paint applications on some of the glitter releases – the Metal Swipe Glitter Bombs for the Unchiman  and Jingle Bombs for the Finger Five.

In the second half of the year – we started working with our new S.T.E.A.M. colorway – Copper base with Gold and Silver highlights and black eyes. This color was originally dreamed up over a year ago on a few of Rolito’s the Boy releases and so far we have tried it out on the STEAMER Unchiman and the “STEAMY Fingers” Finger Five release (apologies to Mick & Keith). Stay tuned for some more exciting toys in the Steam-y Punk-y colorway in 2016.

On other fronts, I was super-sussed to attend ToyCon 2015 in London with rising superstar Konatsu. Its always exciting to see how toy culture is evolving and thriving in other parts of the world. Wonderful to see a Japanese creator thrilling the punters halfway around the globe. Super shoutouts to Manabu at Wonderwall/Fewmany, Barry over at The HangGang, and Ben & Blair -those nutbags over at Kore-Kore – for having me over. Hope to do all again – bigger and badder – in 2016! I want to give a Super-big Big shoutout to Kaiju Soul Brother Number one – Paul “Kaiju” Copeland. Paul has seen another stellar year – the personal highlight for us though was his pilgrimage to Japan where he dominated the first day of Design Festa in May. It was awesome to bop around Tokyo with the big guy and it’s been an honor and a privilege to be able to do releases of the Glitter Bomb Unchiman. Love you man!  It would be remiss not give it up for the rest of the “Finger Five” who have all been kicking ass all year: L’amour Supreme, MonsterHero, Onell Design and – of course – the Super Sucklord.

Also a hearty thanks to Jon “Rampage” Malmstedt who has lent a mighty hand with his top notch painting skills to a bunch of great releases over the past few years. Jon has done some stellar paints on Unchimen and this year he did a gorgeous Mockbat for Sofubi Banpaku as well as Unchiman eyes on several of the Glitter Bomb releases. Jon seems to continue to move from strength to strength – wish him the best in 2016. Best boothmate ever.

Additionally this past year, it has been a privilege to work with Goto-san – the living legend – and get to know him better. He has taught me so much about paint and color. I still have SOOO Much to learn. If you haven’t watched the interview he did with Vice Japan last year, quickly correct that now.

2015 was the first year in a long while to not see any releases in our long-running Millennial Monster colorway, but it will be back with a vengence in 2016. This year will also see (fingers crossed) the release of several long-brewing projects including our Visible Man collaboration with Unbox Industries.

Looking forward to kicking off 2016 at Superfestival 70 on January 10th.

Hope to see YOU there!! Fig-lab will be at the next Superfestival – Volume 70! My how the time flies!

Superfestival 70 will be held at the Science Museum in Kudanshita on January 10, 2016 – doors open at 10:30. If you have never been you owe to yourself to check out the coziest little toy show in Tokyo. A great mix of the latest indie sofubi releases and funky vintage retro as well.

We will be sharing a booth with compatriots Rampage Toys & Galaxy People in the same spot Rampage and I were at the last Superfestival in September in a corner of B Room. I am sure the boys will be bringing the goodies from their own expanding lines. Fig-lab will have some new releases from the usual collaborators as well. Watch our Instagram and Facebook Page for more info about releases!

For more details on the event check out the official Superfestival homepage over at Artstorm. Just for the month of December, Fig-lab’s international online shop – FIG-X.net – has free shipping anywhere in the world on any order over ¥5000! JINGLE BOMB Finger Fives, S.T.E.A.M.  colored creatures and a few special bits and pieces will be popping up as the month goes on. Use the promo code HOHOHO2015 at check out to get your gratis shipping. Happy Holidays from us here at Fig-lab! To celebrate the year-end we are dropping a sprinkling of these Jingle Bomb finger puppets. Wrapping up the year of the GLITTER BOMB in which we explored the spectrum of various Glitter-infused vinyls for our figures – we recently started experimenting with paint schemes that would work with this sparkly material and came up with a metallic wipe with a few choice free sprays. The result is a festive look that will look perfect under the tree or stuffed in a stocking. These are pretty limited so head over to FIG-X.net with bells on to grab your favorites – ¥1500 each (~$12USD). For a limited time you can FREE HOLIDAY SHIPPING on any order over ¥5000 yen when you use the coupon code HOHOHO2015 at checkout. Here at Fig-lab we have been pretty stoked on our new S.T.E.A.M. colorway utilizing Goto-sensei’s inimitable metallic Copper, Silver and Gold paints. Last month, we released a handful of PaulKaiju’s iconic Unchiman in this new colorway that we have developed (a few of which are still available!) and now the Finger Five get the full S.T.E.A.M. treatment. As always you can buy single servings of your favorite character for ¥1500 each (~$12USD) or grab all five and get the secret bonus figure (hint: its datadub). Available now at FIG-X.net! For a limited time you can FREE HOLIDAY SHIPPING on any order over ¥5000 yen when you use the coupon code HOHOHO2015 at checkout. Fig-lab will be contributing a clutch of Datadub finger puppets – several Metal Swipe Glitter Bomb one-offs plus an exclusive micro-run in a Metallic Bubble Gum stylee. Shiny shiny –  just in time for the Holidays

There will be a preview gathering on Friday evening (11/27) from 6pm ~ 8pm with sales beginning from shop opening on Saturday morning (11/28) at 11am.

At DesignFesta 39 held at Big Sight on May 17 & 18th, Fig-lab shared a booth with the usual suspects. My wares were sandwiched between the dual creative powerhouses of Refreshment Toy on one side, and Rampage Toys on the other.

DesignFesta is held for 2 days, Saturdays festivities at the Fig-lab table were mainly around the release of some choice PaulKaiju pieces that I won’t torture you with here (but the new Mock Pilot is adorable and the King Jinx one-offs were to die for).

Sunday – the more leisurely day of the Fest – I held the first DONTEN (呑展）- an exhibition around my favorite finger puppet – the Datadub – based loosely on yours truly. The Datadub figure is on the same mold as the illustrious Fig-lab Finger Five and has for the most part been used for self-promotion or as an omake – which is the Japanese word for special bonus.

This was really the first time that the Fab Five stayed at home, at our little Datadub took the center stage.

To one side – I had an array of a few of the custom one-offs I have had painted by some the artists that I admire and adulate.

By the time I arrived it was all over – the tables had been picked clean and the hardcore had moved on. But it was all the better to take photos of the glorious display cases. The 2 day event was held on the sixth floor event space of Yamashiroya in Ueno, arguably the best toy store in Tokyo. Each day started with an assortment of exclusive releases, including the newest addition to the RxH adult line – Pheyaos – an entirely new sculpt of the previous collaboration with Onell design that started with the mini Pheyaos in 2009 and continued with the adult Pheyaosman in 2010, also was a release of the new Paul Kaiju sculpted Jinx Man.

The main case was filled with an assortment of releases both old and new. One shelf was dedicated to the event releases all with Sold Out notices handwritten on the RealxHead shiriken coasters. Other shelves had all the recent releases of recent newcomers Mohican Trooper and another a grip of Bioknuckles.

At fig-lab we are more than slightly obsessed with form factors and RealxHead is the master of creating and populating his own unique format niches. Since 2009 (Post Lehman Kick) realxhead has shifted the focus of his “artistic” output to a line of “adult sized” figures away from the first wave of his popular “fight-sized” figures. Slowly and steadily he has been expanding this line of figures.

As a Realxhead is celebrating its 10th year as a toy brand this year and we thought this would be a nice time to do a series of post regarding the evolution of the RxH adult line. stay tuned.  For now enjoy this photo gallery. 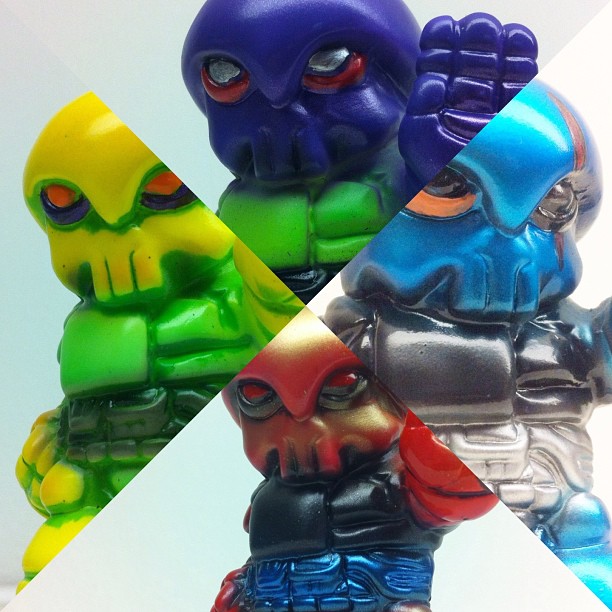 Customizer extraordinaire Hellopike is at it once more with a grip of his one-of-a kind customized Phase Pheyden Sofubi Finger puppets.

Grab one of these blind-bagged beauties before they are Phased Out! 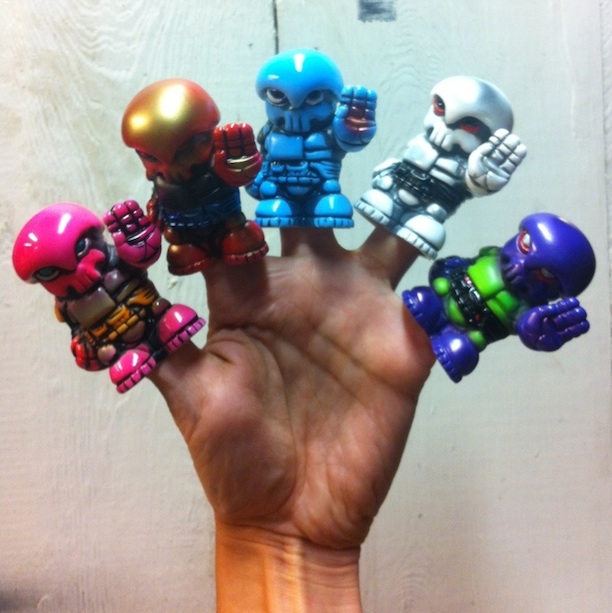