All Star Bazaar – Open – 1pm
Return of the morning buffet of figure entrees.

Paul Kaiju – 1pm – 3pm
The West Coast Master of Monsters will hold forth with a cornucopia of his latest creations.
Suckadelic – 3pm – 5pm
The East Coast King of Bootleg Action Figures holds court with a bevy of hot Necromancer exclusives and sexy sidekicks.
Monster Worship – 5pm – 7pm
Newcomer to the Symposium – Monster Worship will be dropping new vinyl goodness from their All Star roster including Johnny Ryan, Jeff Lam and Mark Rudolph.

All Star Bazaar – Open – 12pm
Your first stop in the morning to tide you over for a long Saturday of Figure overload.
L’Amour Supreme & Fiends – 12pm – 2pm
Illustrator Provocateur L’Amour Supreme is bringing an All-Star entourage of artists to the table for 2 hours of creative chaos. Rumored yet unconfirmed names culled from the Twitosphere have included Skinner, Count Chocula, TWERPS, the Creature from Laguna Beach, COOP, and Beezelbub Jr.

Vectar’s Saturday Night Special  – 5pm – 7pm
He’s Baaaack. Second tier toy villain crashes the Symposium to drop a glyos-compatible version of himself. He will be joined in his capers by SideKick Lab. It might get messy.

This years GFS is once again proudly hosted by Onell Design & Rawshark Studios.

Once again this year’s Global Figure Symposium is graciously hosted by Matt Doughty from Onell Design and Jesse Moore from Rawshark Studio. We have a nice mix of familiar faces and first-timers. Unfortunately none of the Japanese artists were able to come over this year – but will still be there in spirit and toys. Schedule coming soon!

in brand new episodes as personally related at the third meeting of the Global Figure Symposium. 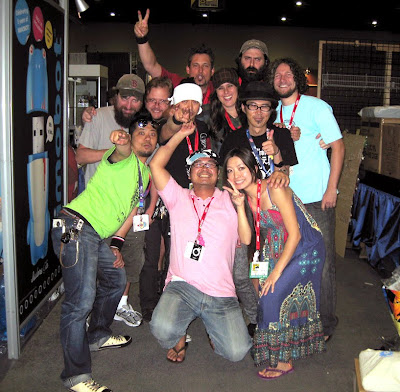 The Rift in the space-time continuum has closed but our universe will never be the same.
The Global Figure Symposium 2010 – the CROSSOVER – was a smashing success – old friends, new alliances, familiar figures and radical re-imaginings were all in evidence.

A super big thanks to Matt Doughty from Onell Design and Jesse Moore from Rawshark Studios for giving up half (way more than half) of their booth for the event as well as being deep in the mix.

Big UP to all the creators who participated:
Real x Head, Uamou, Skulltoys, PaulKaiju, Dead Presidents, MonstreHero, L’amour Supreme, Sucklord (and Vektar), The Tarantulas, Jesse DeStassio, Spy Monkey Creations, Brand Loyalty Toys, and everyone else who made the event what it was!

You can check out coverage from across the web.

The Crossover at the Global Figure Symposium SDCC

“I think one of the most interesting events this year was the tiny booth that seemed to hold a small army of artist and toy makers”. – Toybot Studios

“This one ranked at the top of the list for booths that I needed to check back in with. There was always something new and interesting…crossovers…small runs…handmade pieces. The Global Figure Symposium killed it again this year. ” – Plastic & Plush

“I personally look at this with awe and interest, especially this concept of a show-within-a-show with a specific focus, to me is pretty well brilliant, IMHO. “ – ToysREvil

“Bringing in all those artists, and having that crazy schedule of people come into the booth everyday with these crossovers. Thank you to datadub, thanks to Onell.” – Ayleen, Toy Break

“Next time you’re at Comic-con, you gotta get to the Onell booth, cause there are just so many great people, selling so many great things .. just awesome” – George, Toy Break

Thanks to everyone for kicking ass and making toys.